In August 2015, 150 people traveled to Weston-Super-Mare for our first Kidz Klub family trip. Here’s a quick run-down of how this trip came about, and what happened on the actual day. 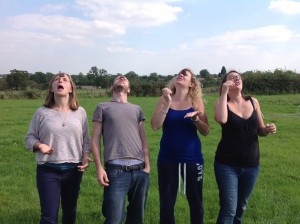 Staff from Westwood Church “eating with their faces!”

Last year you may remember the Kidz Klub campaign to win some funding from LLoyds Bank. It all began with the messy challenge of “Eat With Your Face” – encouraging an online viral campaign to get votes in for Kidz Klub – it ended in November 2014 with the news that we had won the top amount of funding; £3000, to spend on a special family trip in the next year for forty Coventry families.

Now the real work had begun. The challenge of organising an exciting day trip for around 150 people suddenly began to dawn on all of the staff here at Kidz Klub. However, finally we decided on a destination – the sunny Weston Super Mare. As Coventry is possibly the city furthest from any coast in the UK, we decided that a trip to the seaside would be a great treat for Coventry families, and possibly something that many could not experience often. After thinking and planning, a date in August 2015 was decided and plans made. 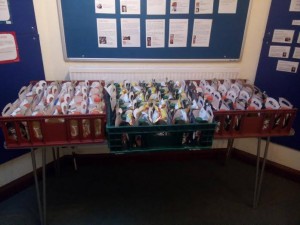 Some of the 180 lunchboxes

Thanks to the Lloyds Community Fund and Coventry Mothers’ Union we were able to book four coaches to transport everyone to the coast. This money also allowed us to purchase a fish and chip supper for everyone in the evening and provide packed lunches from Jin’s Cafe in Cannon Park, ready for arrival at Weston-super-Mare.

The day of the trip itself dawned bright in Coventry. Four coaches made their way around the different areas of Coventry, collecting invited families, ready for a trip to the HOPEFULLY sunny coast. However, on arrival at Weston-super-Mare two hours later, it would appear that the weather would not be as such. The rain pelted down as children rushed to collect their families’ lunchboxes, whilst parents huddled in bus shelters.

It wasn’t all doom and gloom though. The rain eventually died down and families began to disperse – some to the town to peruse the local shops, some to the muddy beach, some to the newly refurbished pier, whilst others to ride the famous donkeys! At the pier the children were enjoying the amusements and indoor rides – many smiling and giggling as they watched each other on the ‘Robocoaster’ and ‘Sidewinder.’

After a long day of playing, walking and shopping, all the team and families met together to enjoy a free fish and chip supper from Winston’s Fish Bar. The warm parcels were quickly handed out and small groups formed on the dry sand underneath the pier, as people tucked into this British delicacy.

All too soon, it was time to return home to Coventry. Families piled back onto the coaches, chatting about the different things they had all got up to on the day. Some children said their favourite thing was the arcade, whilst many of the parents commented that they enjoyed the opportunity to spend time together as a family, and also with other Kidz Klub families.

We’re so grateful for all the funding Kidz Klub received which made this trip possible – particularly from the Lloyds Community Fund and Coventry Mothers’ Union. Special thanks also go to our wonderful staff team who organised and planned this great day!

Kidz Klub run fun-filled, fast-paced children’s clubs, and other family activities, from five locations across Coventry. Click on these links to find out more about each of our clubs – new children and families are always welcome!

This site uses Akismet to reduce spam. Learn how your comment data is processed.